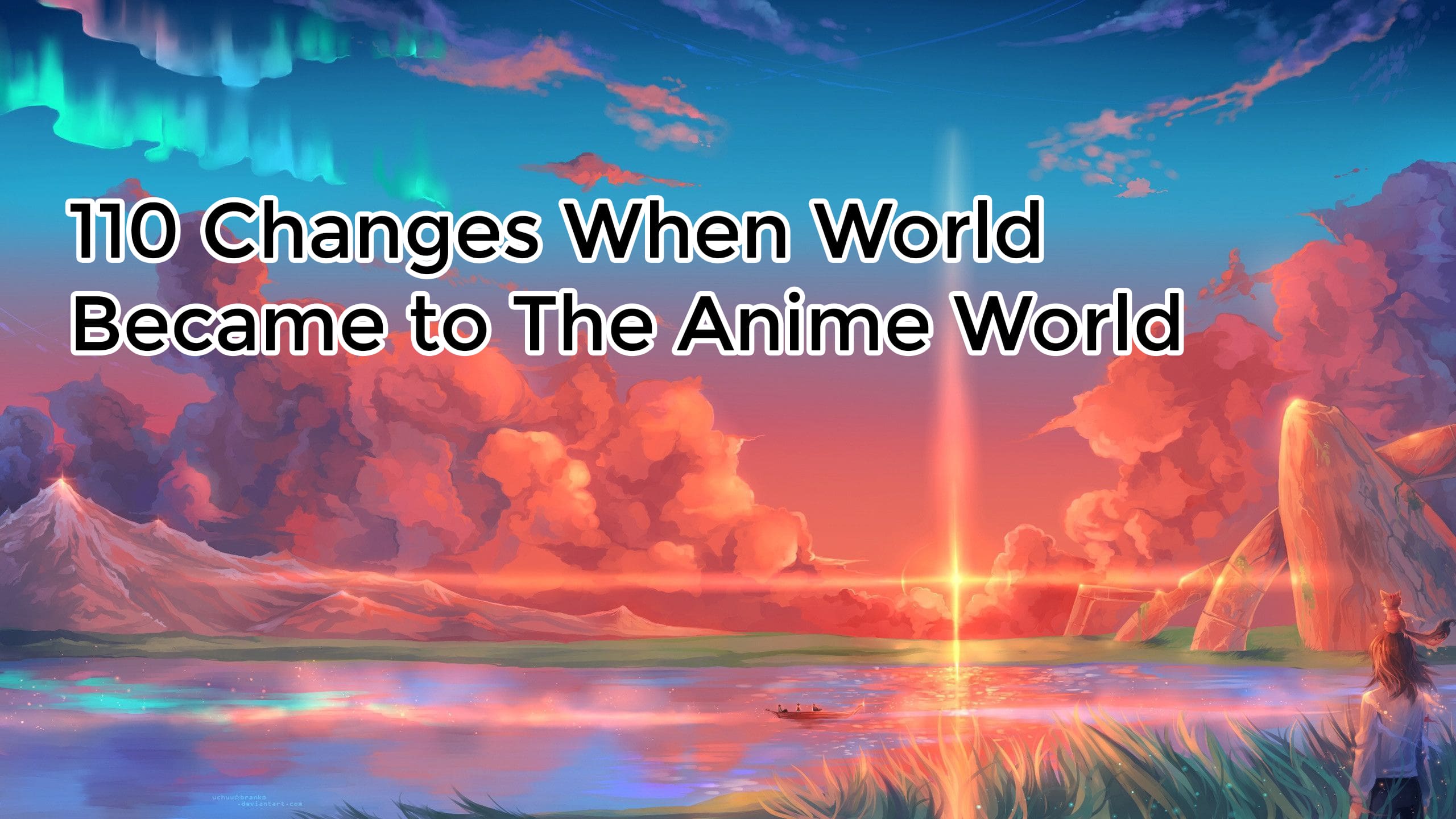 I want to live in the anime world, because anime is better than reality.

I think this is the aspirations of many anime fans.

So, have you thought about what will happen once our world became an anime?

There are many anime fans with their brain stem giving opinions.

When the World became anime

1. Our skull will be like this, big eyes and small nose and mouth.

2. Everyone will have the perfect hairstyle. Rain, cyclone, etc no matter what you face, your hairstyle will remain as it is.

4. The best thing is Everyone will get superpowers. Yeeess. Which one do you want?

5. Everyone will face time skip and even the ugliest duckling will change into the most beautiful swan.

6. Even if your legs, arms are broken, even if your half body is missing, you won’t die. Hail immortality.

8. You will be fluent in every language spoken on the earth. So no more language barriers. But most of the communication will be in Japanese.

9. Smoking and drinking won’t kill you.

10. No need to worry about the size of clothes as clothes will adjust automatically accordingly to your body size and shape.

11. Everyone will wear the same colored and design clothes every day. But those clothes will be damn fashionable.

12. Everyone will get the ability to transform into cute chibi form.

14. Our body won’t have any limitations. Eyes can completely pop out of our head or jaws can drop to ground level like this.

17. Animals will become weirdos too. Animals will have emotions like humans from honesty to perverted. No wonder if some said this to you.

18. There won’t be anything like physics or chemistry. But maths will be there.

19. No peace as war will always be ongoing. You will either live 100+ years or die the next second.

20. There will be four categories in the world, heroes, villains, normal people, and annoying people.

21. Our life will be complete musically. Various background music for different situations, opening and ending songs will always be playing in the background.

23. Everyone will live an either normal or happy or tragic life. Depends on your luck. But 90% of people will get a tragic life, 7% normal and 3% happy. Just pray that you won’t suffer like Kaneki.

24. There’d be no need for make-up. Because all anime girls are beautiful just the way they are…

25. Acne would be a thing of the past. Because anime characters have perfect skin.

26. Guys would be seen “accidentally” falling into a girl’s breasts. Because anime is kind of cliche like that.

27. Guys would have their own harems, despite having shitty personalities. Because again, anime is sometimes cliche like that.

28. All girls would have “stereotypical” body types. Because all anime girls tend to be designed that way.

29. We’d have multiple worlds that play by their own rules. Some would be ruled by magic. Others by Saiyans and Gods like DBZ, or Zombies like High School of The Dead. While others would be run by cute, moe girls like Yui Hirasawa.

30. Everyone would have their own natural hair color. Red, green, purple, blue, orange, white, black and blue, brown and pink, etc….

31. We’d be able to win wars and battles with the “power of friendship”. Because who needs logic when you have cliche’s to succeed?

32. We’d no longer need to rely on “wishful” thinking. Why? Because in the world of anime, if you wish and believe hard enough, miracles can literally fall from the sky. Or in your lap. In the form of a hot girl in some cases.

33. We’d refer to each other as “Tsundere, Yandere, Dandere” and other labels found in anime.

34. Kids would be super-powerful warriors and mages. No explanation necessary.

35.We could possibly live forever or be brought back to life. With something like the Dragon Balls. Though that would cause a whole world of problems, so maybe not…

36. We would have traveled to dozens of planets via high-tech spaceships by now. Like cowboy Bebop

37. The wind would “conveniently” flip up your skirt if you’re a girl. And that would be embarrassing.

38. We’d have all kinds of races. Bunny guys, cat girls, frog dudes, Namekians like Piccolo, and who knows what else.

39. If you walked into a bathroom (or something similar), you’d accidentally find a hot naked girl who’s an airhead.

40. Literally every girl in this planet is cute asf or just plain gorgeous and each one would have a body that every girl right now would kill for.

41. We would have all types of hair colors and we would no longer be limited to having your standard brown and black hair.

42. Harem would be almost everywhere (and would probably happen to me)

44. If you were to do 100 push ups and 100 sit ups accompanied by a 10 km run then congratulations your officially the strongest being in the universe

45. We would have crazy expressions

46. The smart guy has the ability to make his glasses to shine whenever he tilts them.

48. It wouldn’t be considered illegal to fall in love with Underaged girls.

49. Everyone would know what happens after death, isekai.

50. If you have friends your power of friendship will allow you to do anything.

51. Girls hitting guys would be a lot more accepted.

52. If a girl walks in on a guy changing then she can consider it rape, thus feminists will thrive.

53. Make-up wouldn’t exist, as all women will be considered attractive.

55. If you’re popular at school you’re going to sit next to the window.

56. Women will have the voices of 3 year olds in helium.

58. Black people will be very rare, there’s genuinely like 4 black anime characters I can think of. Nessa from pokemon is one of them.

59. If you’re an old man you’re probably stronger than everybody.

60. Nobody would be considered an Otaku since waifus are real now.

61. The strongest weapon in the history of humanity isn’t nuked anymore, it’s “Nakama no Chikara” (Power of Friendship)

65. Engurishu wir be a spokenu ryku diss-u. (If you didn’t understand: English will be spoken like this)

67. If you have windows in your classroom, you must sit right beside them in order to be the main character.

69. Snow falling? Get out of that place, gather all the people precious to you, because something bad is going to happen.

70. If there is a very intelligent top student at your school, there is an insanely high chance of him being a secret member of some society and he’s your rival.

71. Friend’s dead? No worries, there will exist some way to save him. Gather the Dragon Balls, turn him into a vampire, whatever.

72. There are two types of heroes: the hot-headed idiots, also called the Narutos, and the cool, calm, and collected Lelouches.

73. Everyday when you wake up you sing a song (called an opening) and one before sleep, called an ending.

74. Whatever you do, soundtracks will be playing.

75. Your episode, sorry, day will probably end with a big betrayal or shocking reveal and you can’t continue until the next epi-, er, day.

76. Even if you’re taking a dump, you must scream- Hidden Technique: Taking a Dump!

77. There will always be that one girl who loves a person but keeps saying “I-Idiot! It’s not like I l-love you or anything, O-OK?” She will hit you because… no reason. Called a Tsundere.

78. You must remember to stay away from the Yuno Gasai types.

79. Guys randomly crash into the boobs of some random girl, who ends up liking him. This type of species are generally found in their natural habitats: washrooms, corridors and abandoned classrooms. Chance of capture x1000 if you have a cultural festival/class trip going on.

80. Girls falling from the sky.

82. An evil guy wants to take over the world? Chances are that he’s actually a good guy gone wrong.

84. NEVER EVER SAY THESE WORDS AFTER HITTING A BAD GUY WITH AN EXTREMELY POWERFUL ATTACK.

85. If you have a flashback or someone proposes to you before an important event, have fun. You’re gonna die.

86.An annoyingly high amount of people get killed/injured while crossing the road, by a plot device called “truck”.

87. There will always be this one moment where somebody goes completely calm and says “Shine”. Not shine (appear bright). The Japanese word for “die”. Of course, you wont be able to see the person’s eyes.

88. Die properly. Or else, you might get accidentally transported to a fantasy world where you’re a warrior/have magic.

89. If you suddenly get longer hair, it means you’re more powerful. Of course, you can only achieve this by (in order)

A: Almost getting killed by a bad guy

B: Giving a long speech (about friends/revenge)

90. Weird hair color/eye color for everybody.

91. There will also be that one moment where you look up to the sky and say “The moon is beautiful”.

92. If you have glasses you’re either an airhead or an insane genius.

93. If there is a chance for a misunderstanding, God will make it happen.

95. Near-death while fighting a bad guy? Don’t worry, he’ll wait for you to recollect some random advice from your dead friend/mentor which will make you stronger. Hey, don’t forget to yell!

96. If you want a teacher, attack some random bad guy. Your teacher will save you, train you and you’ll be able to beat the bad guy. Also, hold on to him/her, because mentors have an abnormally high death rate.

97. We have thousands of gods. The big three are Masashi Kishimoto, Oda Eiichiro and Kubo Tite.

a: Bargain day at the supermarket

99. If you’re an a) extremely handsome guy, b) have a good heart and c) are impossibly dense to see that someone is loving you, congratulations. You just fulfilled all the conditions of having a harem.

101. If the authors are the gods Hiroyuki Sawano, Yoko Kanno, Yuki Hayashi, etc. are the lords and saviors of this world.

103. You will have infinite copies of the exact same clothes, and you wear them all the time.

105. Don’t worry while powering up, you pants and underwear are protected by a blessing. Only your shirt is ripped into pieces.

106. Your skin is cut and blood spurts only after the guy who did it is standing in a badass pose.

107. If you can’t figure out the villain’s plan, don’t fret. There are high chances that he will tell you himself.

108. No more struggling with hairstyles. of course, your school will allow the obviously over the top hairstyle.

109. If you want to have a private, emotional conversation with your classmate, that’s what rooftops exist for.

Do you like this anime world? Let us know in the comments below.

This div height required for enabling the sticky sidebar

Hey! OXO3D is an Anime 3D print maker, we focus on creating anime, manga, and video game characters. We want to bring your favorite scenes and characters to life for you. If you want the specific 3D print model to be created, you can contact us on our Facebook page.